The Looker is a comedic puzzle solving game that parodies Jonathan Blow's The Witness.
This title was developed using Unity's scriptable rendering pipeline and features over 55 interactive puzzles, most of which have unique gameplay mechanics associated with them. This game also features smooth first-person controls, fully voiced dialogue, and advanced real-time texture manipulation.
The Looker is up on Steam and set to release on June 17th.

Pre-Release Trailer for The Looker

Some puzzles advance the player's progress, while others open shortcuts back to previous locations in the game.

To improve performance, the player's marker lines are rendered at 1/16th the resolution of the puzzle texture. To compensate for this low resolution, they are processed by a custom shader that uses a metaball effect to make the lines appear smooth and hand-drawn.

This puzzle adds a few constraints to the normal puzzle mechanic. If one of these constraints is violated, the player is informed, and the puzzle is crumpled up and thrown in the trash. The paper crumpling animation was created by recording a physics simulation in Blender and exporting each frame as a blend shape. In the game, the paper animates by rapidly interpolating between these blend shapes.

This puzzle works both as a maze, in accordance with the rules established in the game, and as a chess puzzle, where the object is Checkmate in 3 moves. When the player finds the unique solution to the maze, the corresponding Checkmate plays out on the board, and the King falls to reveal another puzzle underneath.

This puzzle causes a cannon to fire where the center reticle is pointing from the player's perspective. First, the game casts a ray from the player's camera through the center reticle to determine where the cannonball will strike. Then, a cannon is selected based on whether the shot is aimed to the left or right. Finally, the selected cannon computes the cannonball's optimal ballistic trajectory and procedurally animates to the correct angle and elevation before firing.

This book follows a puzzle progression that gradually teaches the player how the shape mechanic works. When a page is turned, a new page is spawned and an old page is destroyed so that pages can turn indefinitely. Since bone deformations proved too unwieldy, the pages are instead animated with a series of interpolated blend shapes.

Wires, which light up and power subsequent puzzle screens, are rendered as mesh profiles deformed around splines. The puzzle in this clip is impossible, but the wire behind it is actually a puzzle of its own. This puzzle was made by creating the wire object as a spline, exporting it as a mesh, and giving it a custom texture. The wire uses the same puzzle script as the rest of the puzzle screens.

This final environmental puzzle uses the game world itself as the maze, allowing the player to draw over anything that is not colored black.

These puzzles have a horror-themed mechanic, which procedurally propagates the player's lines downwards to simulate the dripping of blood. Using this mechanic is necessary to solve the second puzzle, which is based on a still from Alfred Hitchcock's Psycho.

All player interactions in the game are puzzles, including the in-game menu.

This poster for Ponytail, a parody of Jonathan Blow's other game, Braid, features the game's signature mechanic: time reversal. When the puzzle is completed, the player's solution undraws itself the same way it was drawn and the music plays backwards. Time reverses at 4/3 the normal speed so that the music playing backwards will be shifted in pitch by a perfect fourth and sound musically related to the original melody.

Audio Recorders are scattered throughout the world. The speaker lights up when one is playing according to the volume of the audio at that point in time, measured by sampling the average amplitude of the audio file across the previous few milliseconds.

This game-within-a-game, in the style of an On-Rails Shooter, is set up far away in the same scene using unlit materials. As the player progresses through three shooting galleries, the first-person camera renders to a texture, which is then applied to the TV screen's material to show the player's view.

When the player attempts to draw on the TV screen, the raycasts that are sent out into the scene are re-cast into the On-Rails Shooter's camera space, so that the player can interact with these puzzles as though they were regular puzzles in the game world, even when the TV screen is at an angle.

This rotationally self-similar puzzle depends on the Queen's position on the chess clock. Each piece is animated so that it reaches its destination without colliding with any others.

This interactive puzzle mirrors the gameplay of Snake games in maze form. The player has to solve this maze several times, and each time it is completed, the line the player has drawn becomes an obstacle. In this clip, the player creates an impossible maze by the end, and will have to restart the puzzle.

This inviting-looking telescope triggers an animation and white screen effect when the player looks through it. The game determines whether the player is looking through it according to the camera's location, orientation, and distance relative to the telescope. The inside of the telescope is rendered with an unlit, High Dynamic Range material so that the post-processing Bloom effect will make a large radial sunburst appear just before the screen goes white entirely. 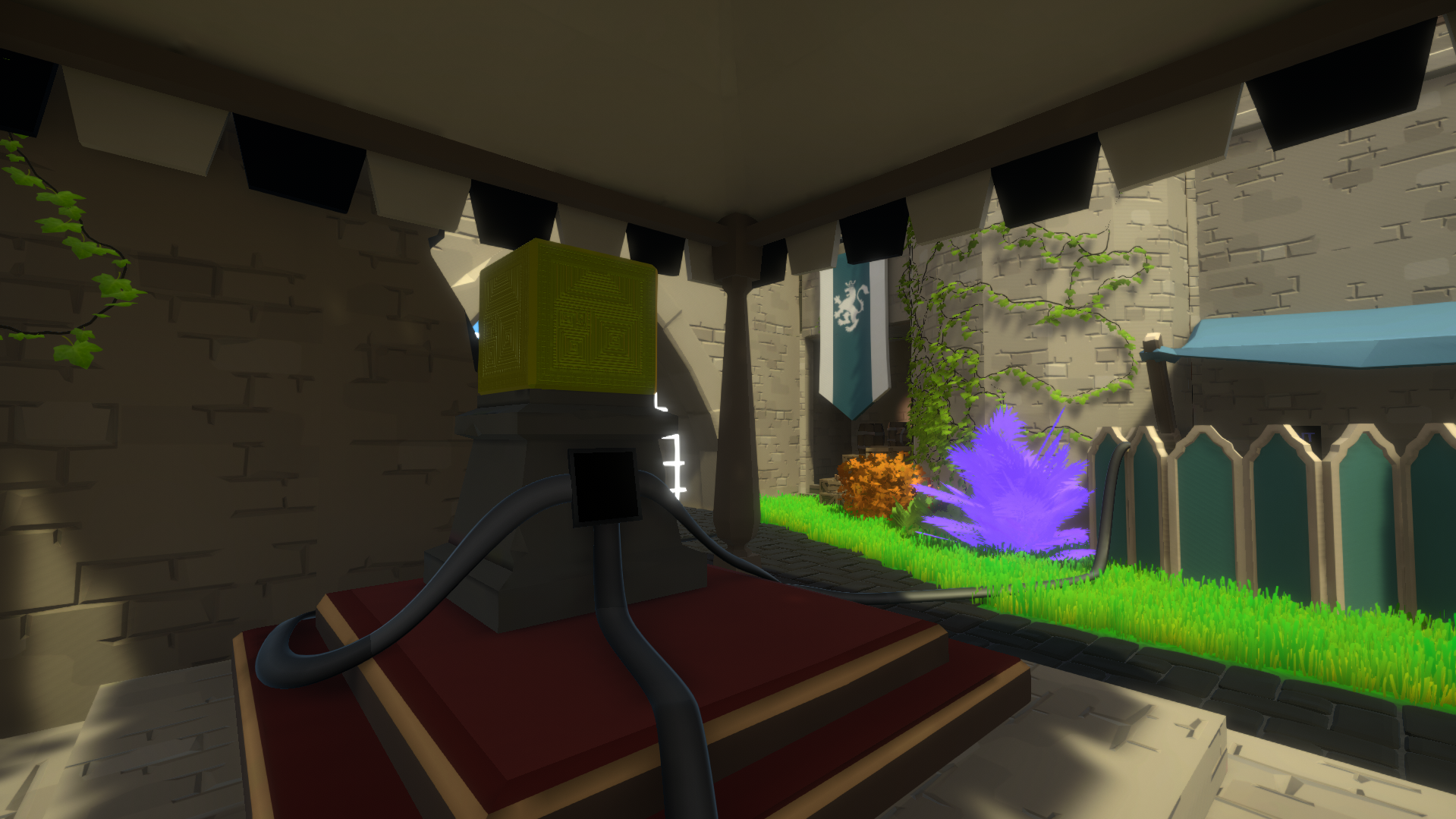 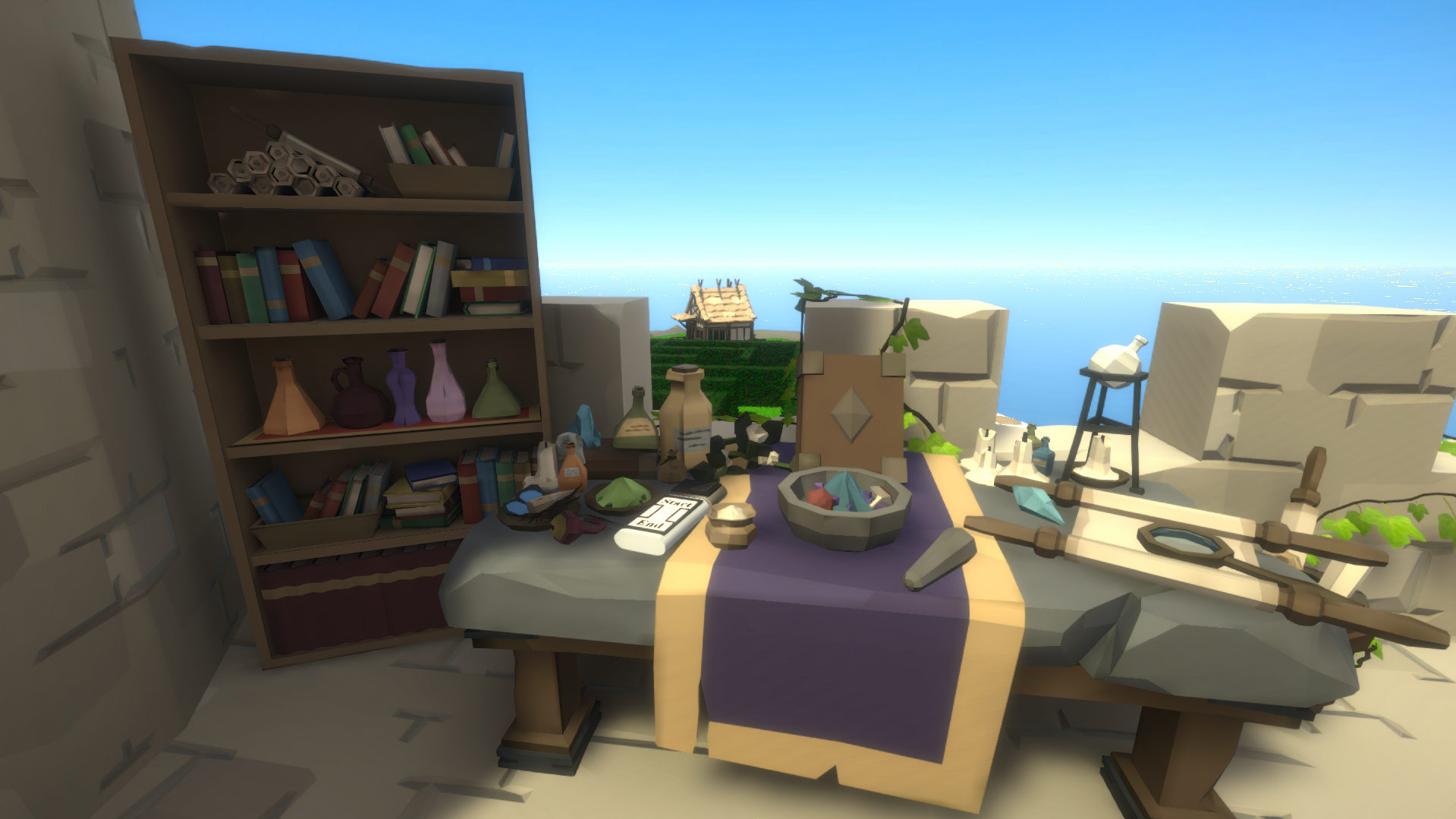 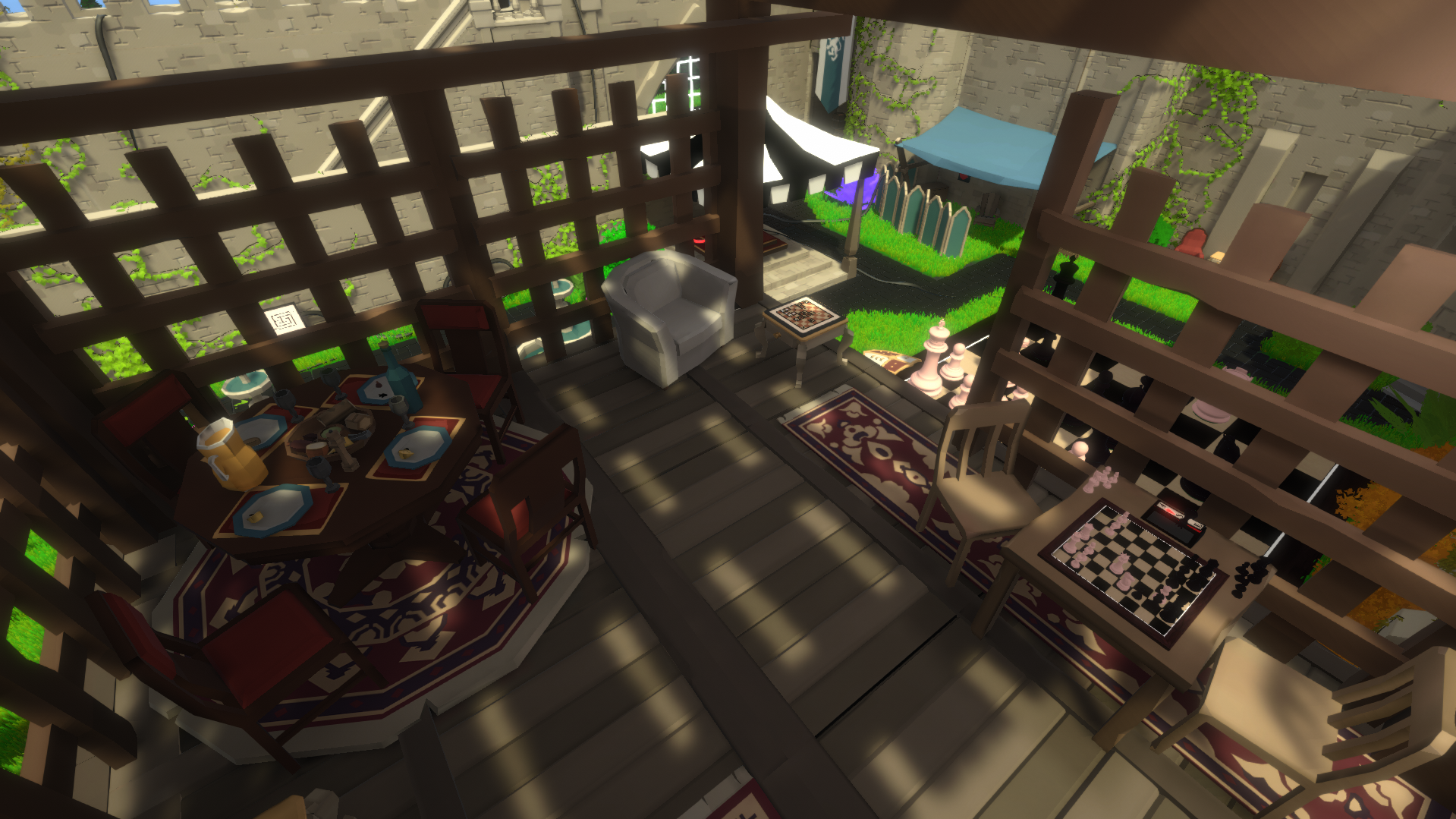 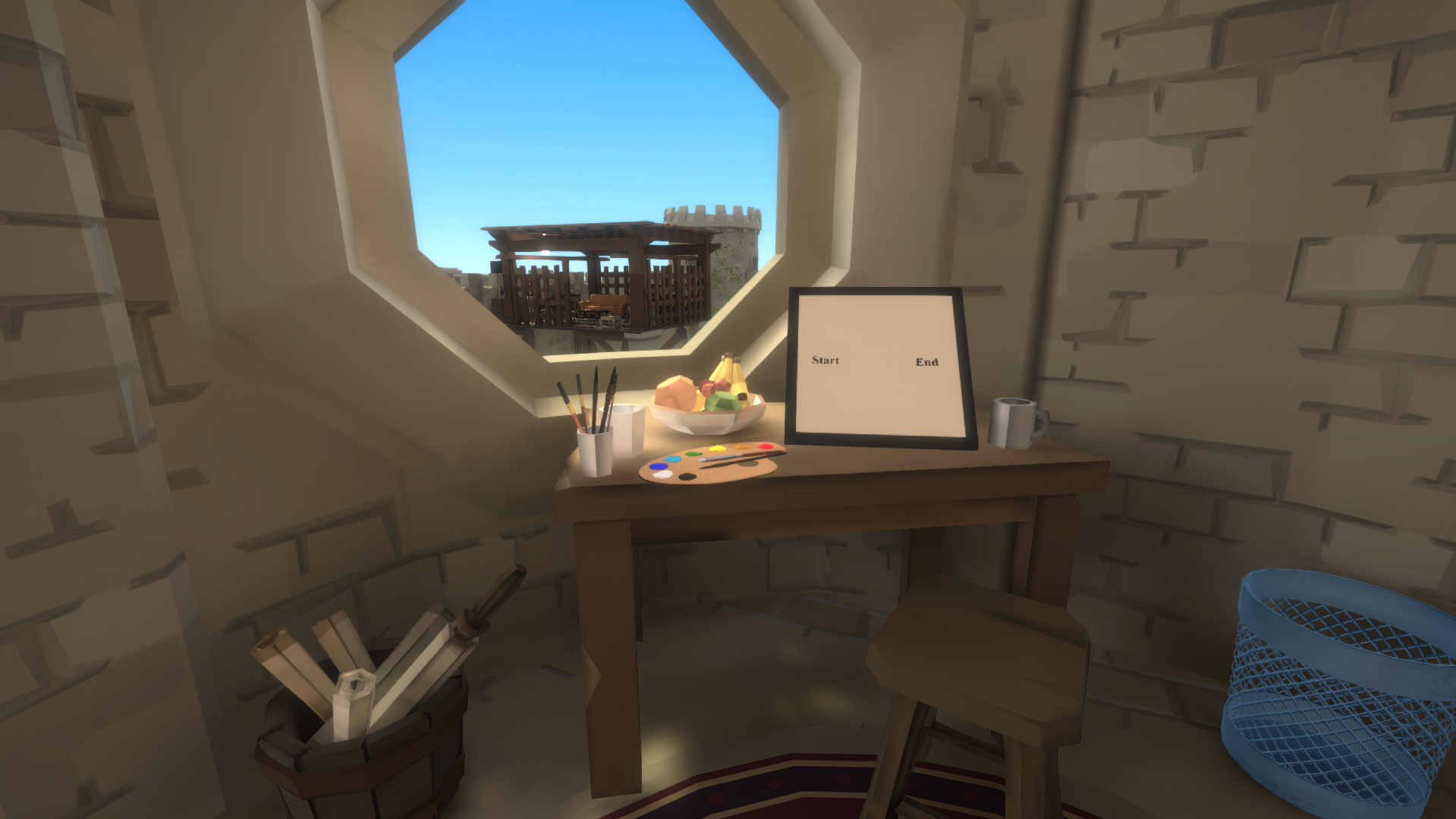 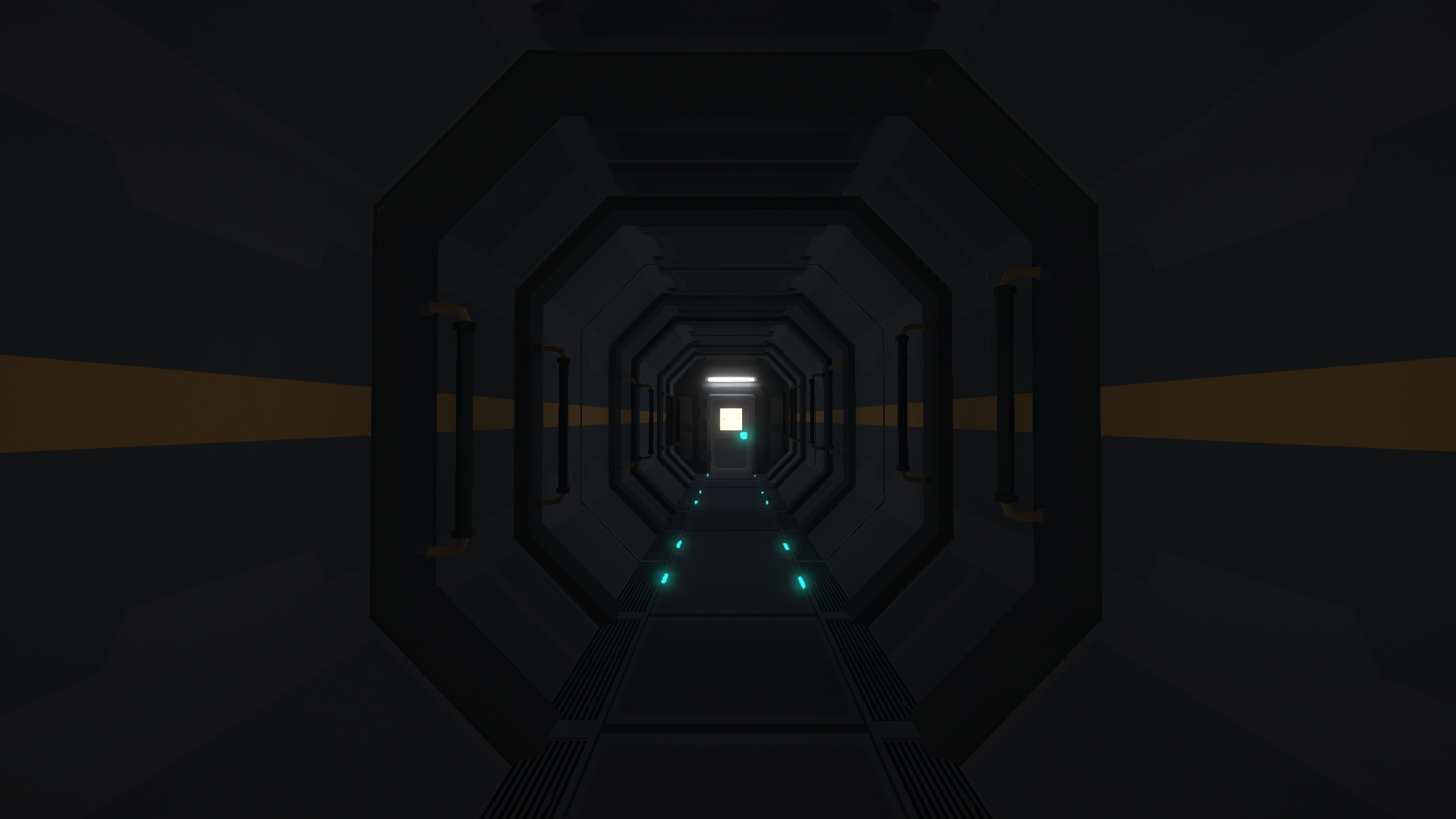 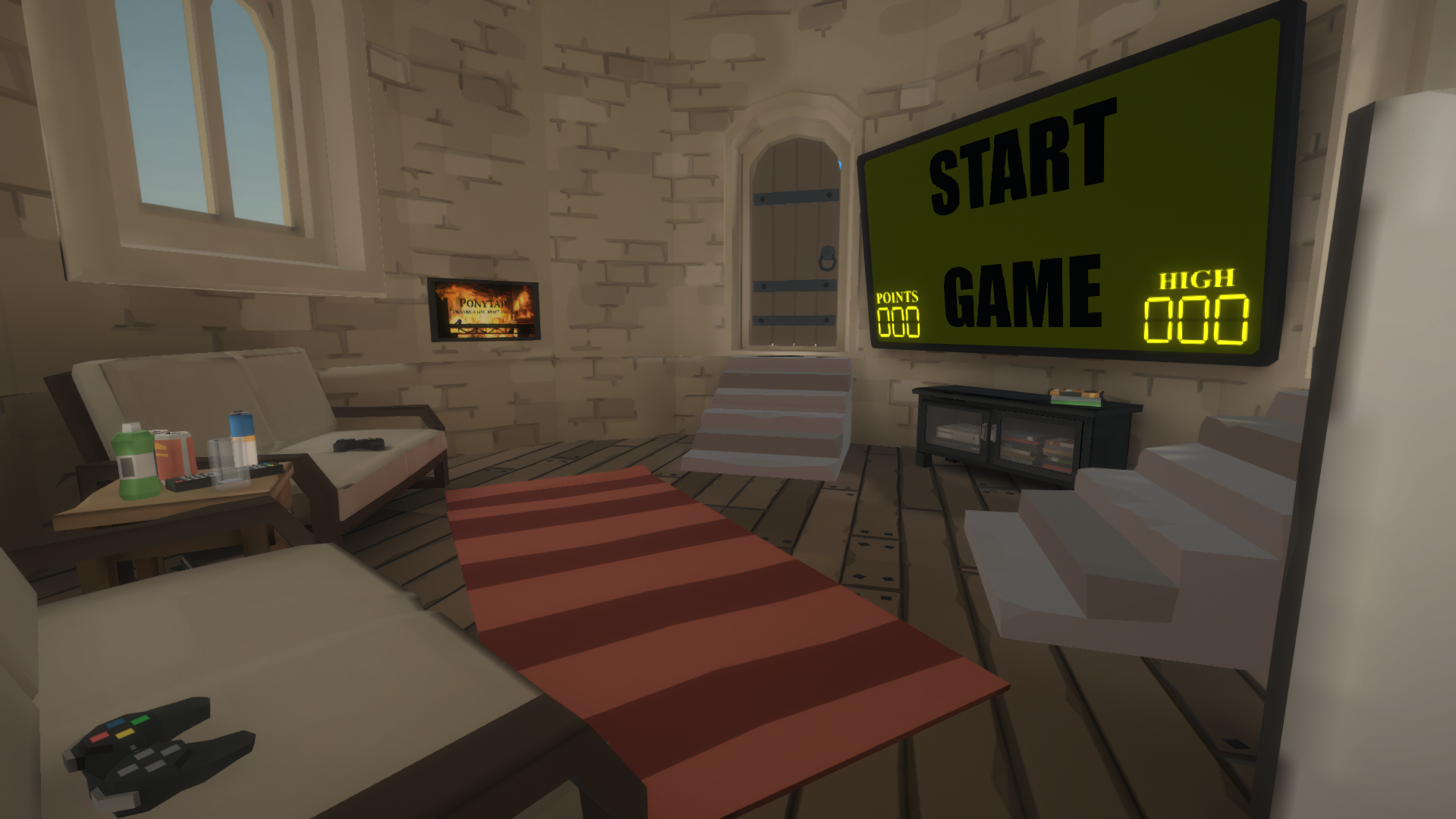 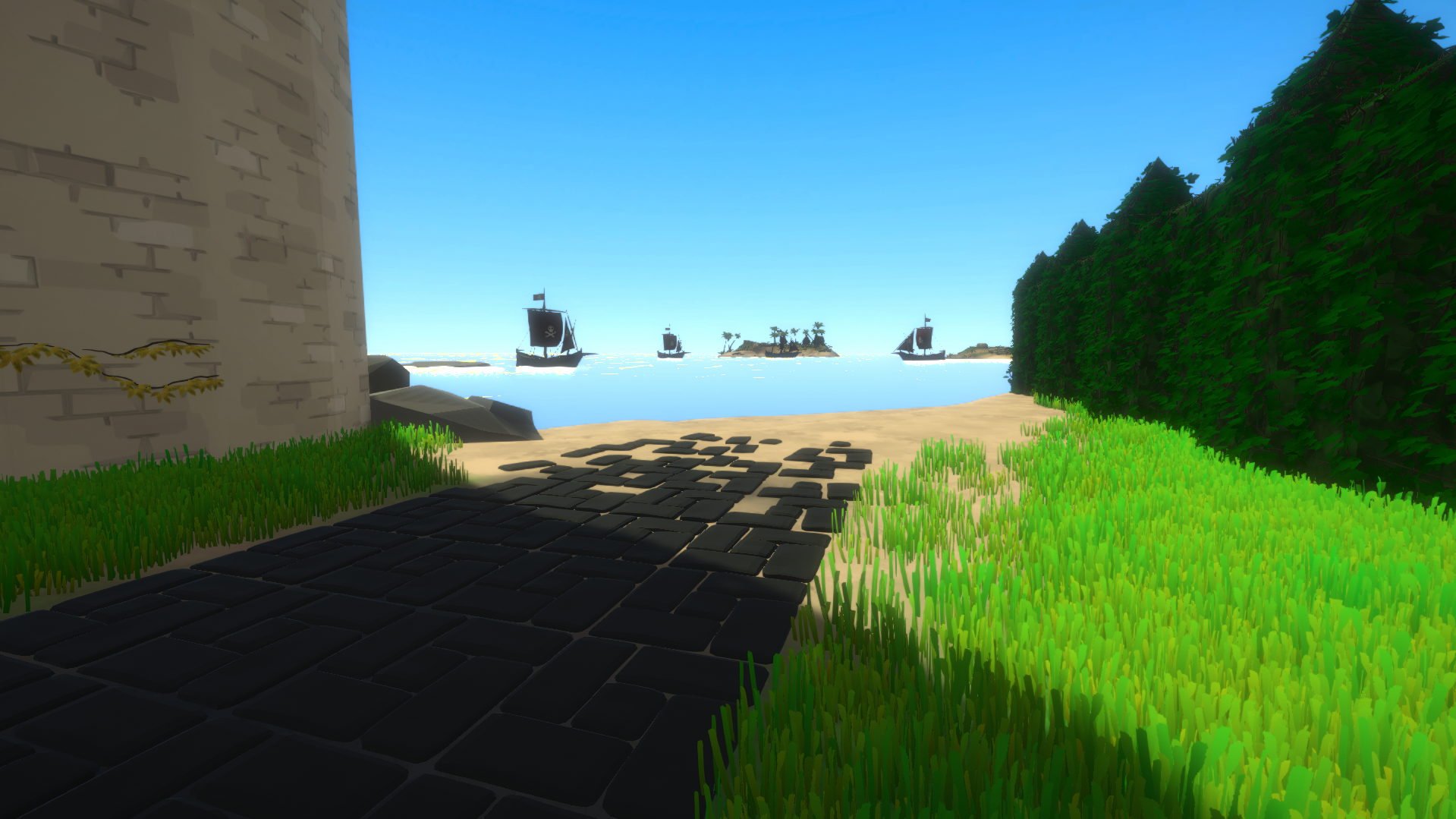 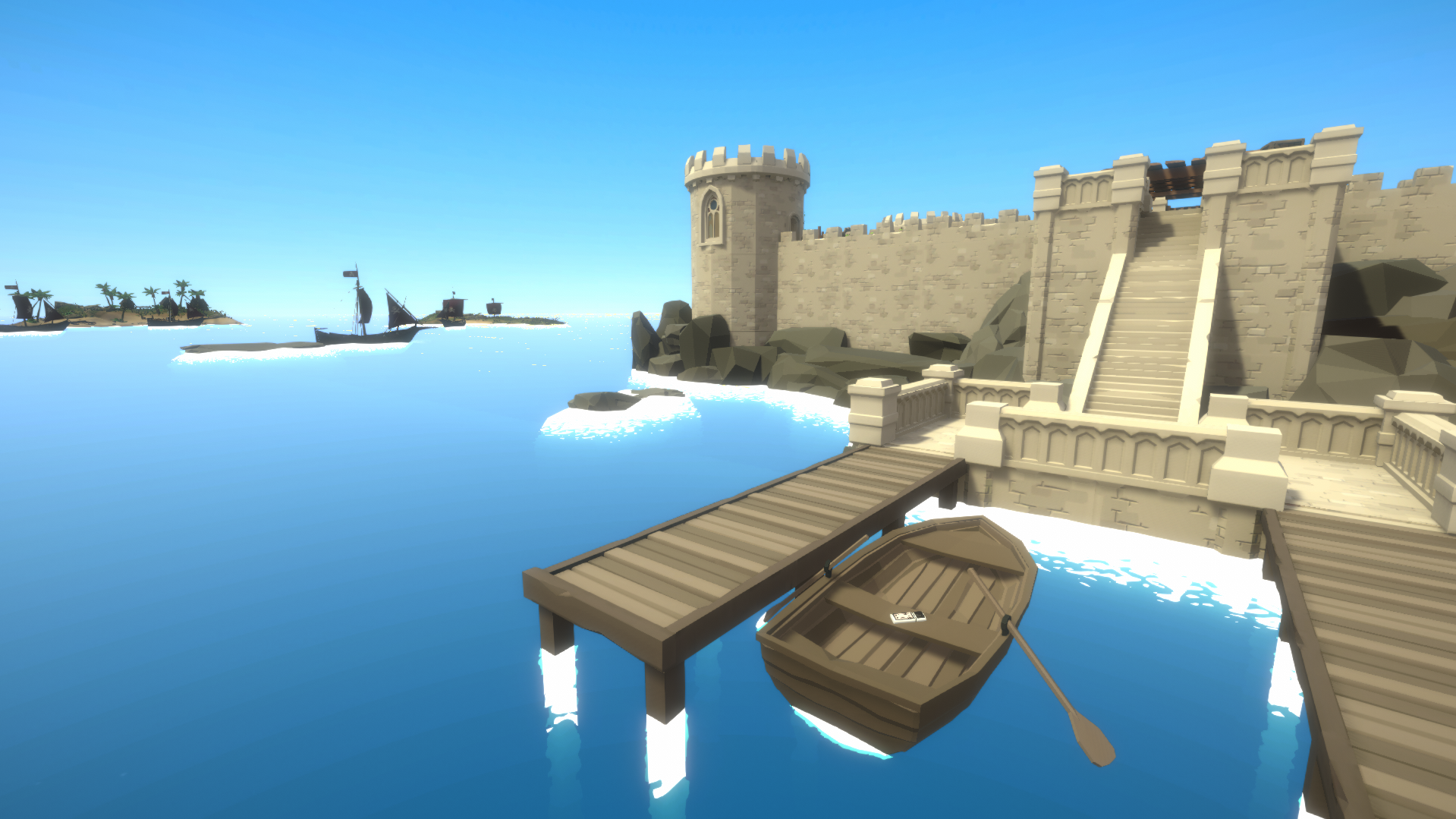 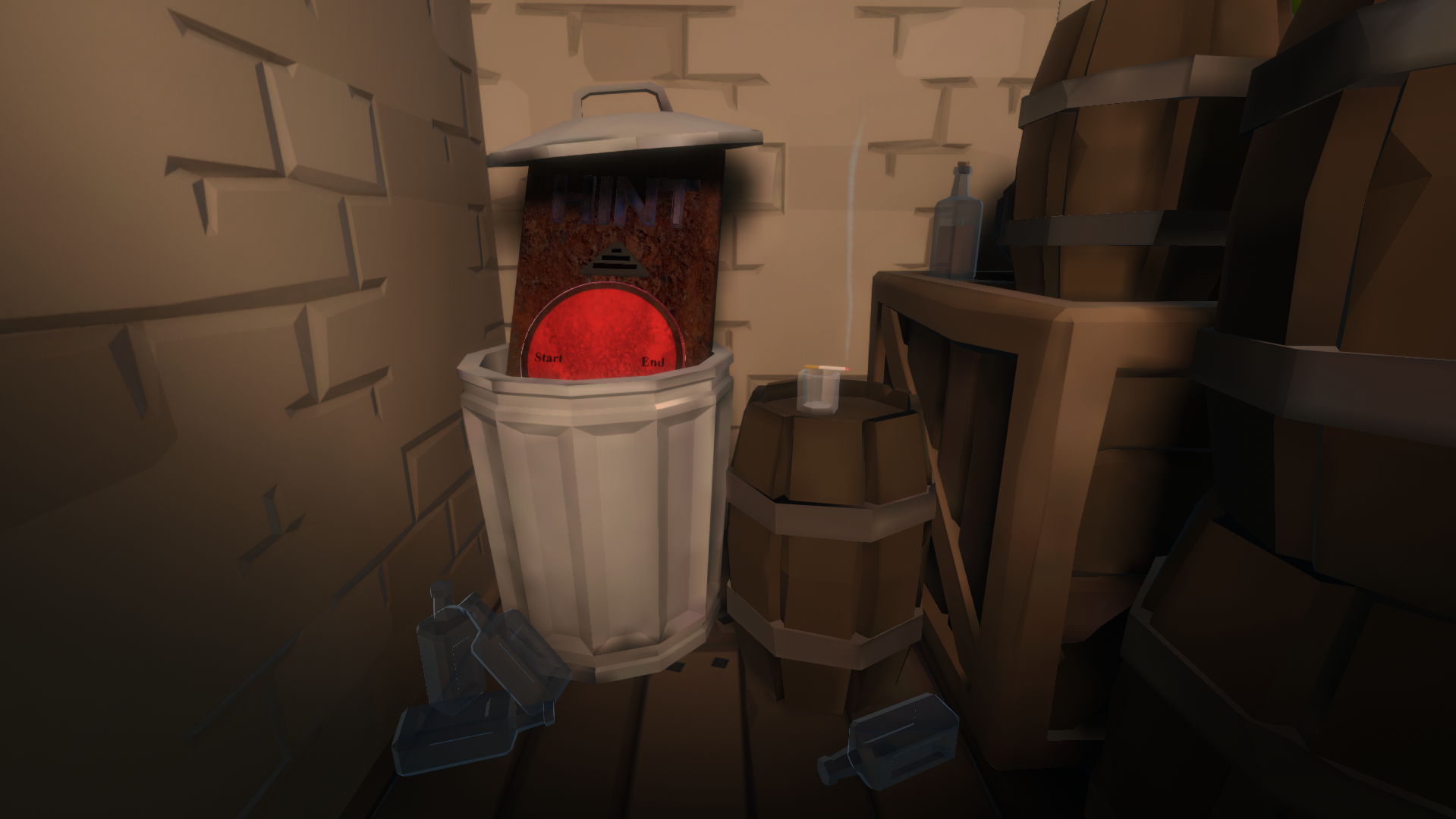 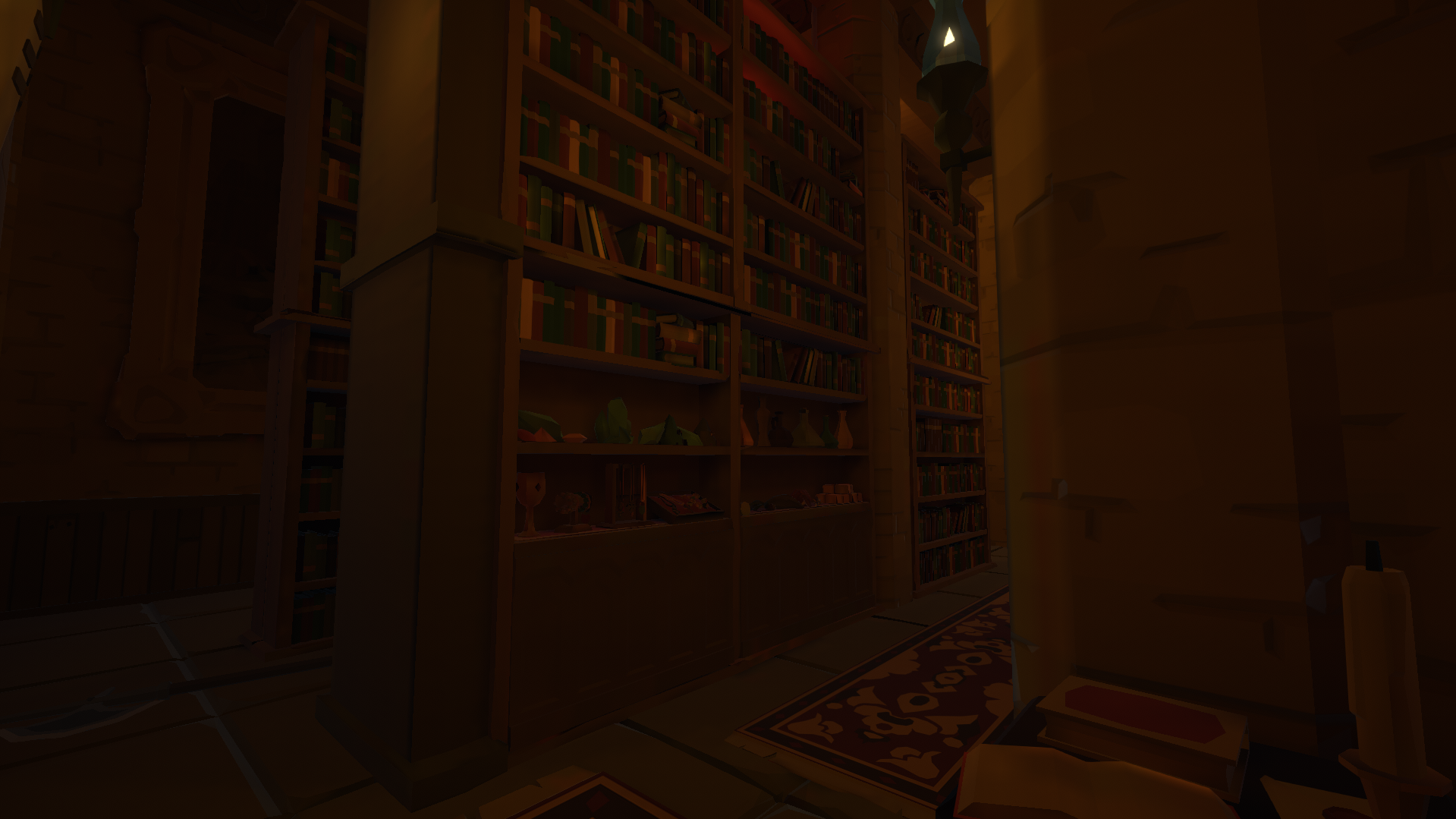 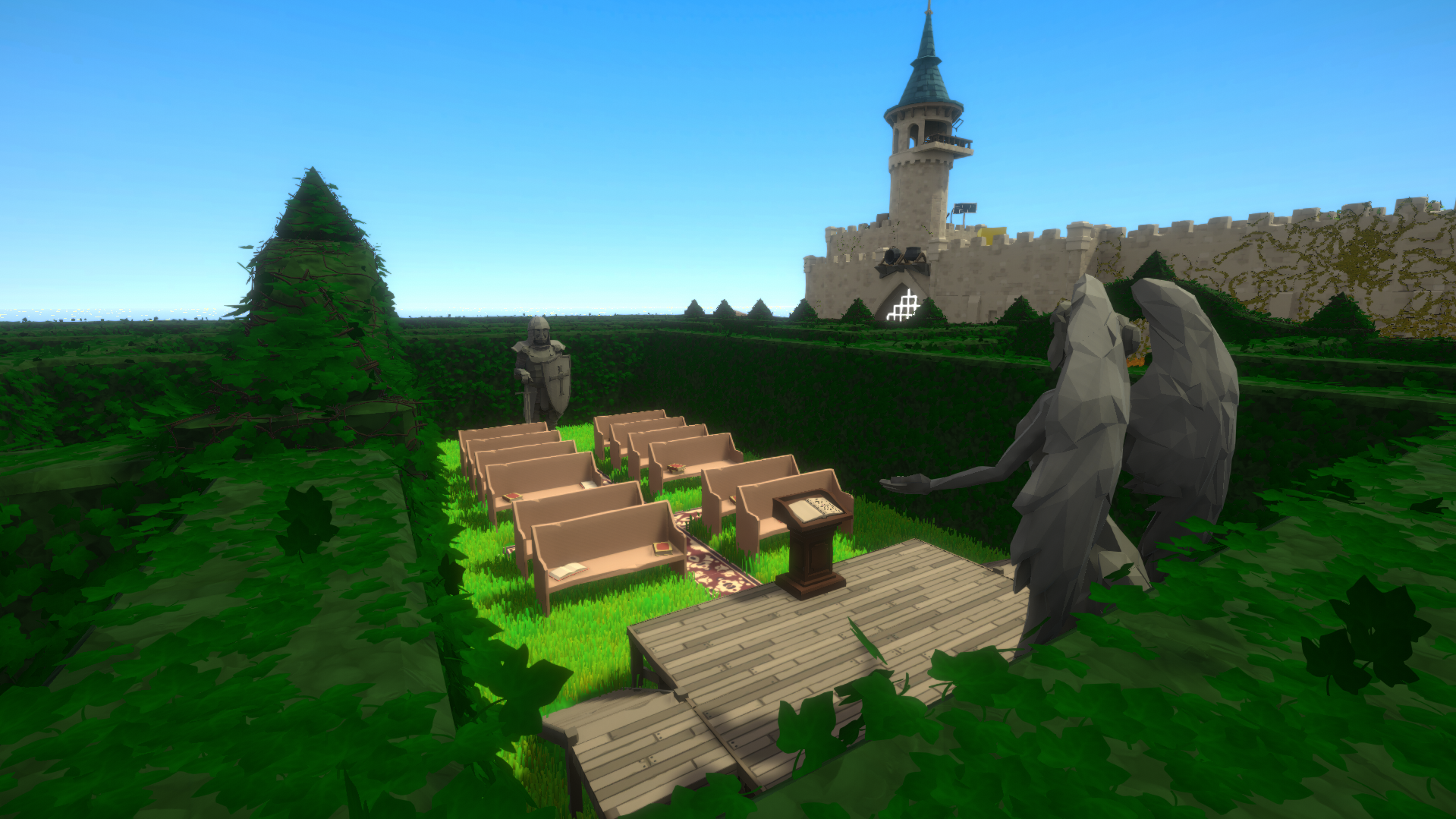